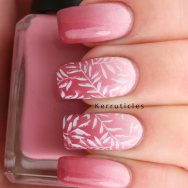 I left it a bit late to run the poll to vote on a theme for this month’s Polish Party, so in the end only a handful of us voted. This resulted in a tie between a 3 colour gradient and stamping. So, for speed and ease, I decided we’d go for a theme of gradient and/or stamping.

I’m not very happy with this manicure at all. Don’t get me wrong, the idea, the colours and the overall look … I’m happy with all that. It’s just that the execution is a bit rubbish.

I’ve gone with a 3 colour gradient, and the colours work so well together. I’ve used Barry M Rose Hip, Barry M Ballerina and China Glaze Fifth Avenue to create a dusky pink gradient. I did it in a bit of a rush, so I’ve not been very careful about covering the cuticle end, which is showing some of its underwear, Barry M Ballerina. Had I planned this manicure better, I would have started with a base of my lightest colour. But this wasn’t planned at all; I just decided to use these colours when I was already wearing Ballerina!

And then we come to the stamping. The plate is lovely. It’s Born Pretty Store BP-19. And I’ve used Konad White to stamp, which works well. But the stamping is really patchy.

I’ve been trying to get the best from my Creative Shop stamper, but I’m just not feeling it. Everyone is raving about this stamper, but for me it just doesn’t seem to pick up the images well. I’ve done everything that’s been recommended to me. Wash it in washing up liquid, prime it with a magic eraser, scrape lightly, roll over the image, press lightly, insert the head differently so that it’s more rounded. But in truth, I’m just not getting the images to pick up anywhere near as well as my red FUN stamper, or even as well as my Born Pretty Store stamper (review coming up soon) or Konad stamper. I even bought a second one in case there was something wrong with the first one, but it’s no better. The images all have tiny air holes in them when I pick up using the Creative Shop stamper. In its favour, it has a wonderful softness and is far larger than any other stamper I own. But that just doesn’t outweigh the poor performance. So I think it’s consigned to the pile of unused stampers.

Here are the other Polish Party manicures for this month:

Let’s see…first, I think this is the loveliest gradient I’ve seen in awhile. It’s true I’m partial to pinks (and roses and scarlets, rubies, reds, burgundys…well, you get the idea), but this combination made me swoon and I admired it for a bit before reading the post. I have to break down and order some Barry Ms. I am so tired of looking at manis by you and other UK artists and reading a Barry M polish was used. It’s not right.

Second, I’ve just recently ordered the Creative Shop stamper and am awaiting it with some trepidation because the research I did before purchasing it actually leaned significantly on the negative side in reviews. When I did read positive reviews, what they had in common was trying a tip they’d heard elsewhere and that was to just leave the Creative Shop stamper out, on a shelf, I guess, for a couple of weeks. When they returned to try the stampers again, they were very happy with the results. They couldn’t figure out why leaving the stampers helped. The best guess I can hazard is maybe the silicone somehow goes through a curing process when exposed to air for long enough? I thought, well, the stamper isn’t that expensive and, if I also have trouble with it, I’ll try leaving it out and see what that does. I thought I’d pass this information on to you. If you try it and start having better (or worse or the same) results, I’d like to suggest you post about it so others…well, I’m thinking about myself, of course…can benefit from your experiment. Have a good day! Delph