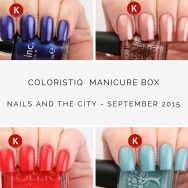 This is September’s Coloristiq Manicure Box. It’s called Nails and the City.

Coloristiq are the people behind the nail polish “hire” scheme. But you purchase this box, not hire it, so you get to keep the goodies!

It costs £15 plus £2.80 P&P. Every box is themed and this month the nail polishes celebrate some of the world’s most exciting cities: London, Venice, New York and Budapest.

The box is beautifully packaged. I was a little concerned upon opening it that the bottles weren’t individually packaged, as per the Royal Mail’s requirements. They did have some paper packaging. I didn’t photograph it, so I’ll have to describe it. It’s the shredded paper that’s also concertina-ed – if that makes sense! I think that helped a little with cushioning the bottles, but I’m not convinced it’s sufficient. Some hefty handling on the part of a postie in the sorting office may well knock a couple of the bottles together. Anyway, that aside, mine arrived safely, and they did have an ID8000 label, which many polish suppliers don’t provide.

The four polishes are all very different. They’re as diverse as the cities they represent, in fact. But each of them is fantastic. I am absolutely delighted to add these four to my collection.

Nails Inc The Mall is a vibrant, shimmery blue. It’s deeper than cobalt, but the shimmer keeps it lighter than navy. I wondered at first if it also has a duochrome quality, as it seemed to shift between violet and blue on the first coat. But the second coat took this away.

It is an old style Nails Inc; the ones in the round bottles. These used to retail for £11. The cheapest I could find this was on Amazon for £3.99, with free delivery.

OPI | Worth a Pretty Penne

The Coloristiq Manicure Box contains one of four OPI minis from the recent Venice collection. You can’t specify which one, so it’s an exciting wait to see which you’ll get. I received Worth a Pretty Penne, a delicious copper, packed with shimmer.

Fifth Avenue is the perfect red-orange. It went on beautifully. I’m a fan of Essie anyway, but this one seemed to have a perfect application. The wide brush with its rounded tip helps with application.

As far as I can tell, this polish had its debut in Spring 2003, as part of the Central Park collection, but it’s such a popular shade that it has remained a part of the permanent collection since then. Essie retails for £7.99, but you can often find it cheaper than that, although rarely so for current polishes. I was able to find this for £4.99 on eBay, and for £6.49 from a more mainstream supplier.

Danglefoot is a UK indie maker. Before I get onto the review of this polish, I think it’s apposite that I talk about nail polish safety. There’s been a lot of drama recently surrounding a US indie polish maker, Mentality, where users have experienced chemical burn-type injuries, which they have attributed to the use of the polish. In the US, there aren’t the same restrictions placed on cosmetics’ manufacturers as there are here in the UK. Here, although the base used may already have been tested, the law requires that manufacturers also submit individual polishes for paid testing by an approved European laboratory when the base has been mixed with pigments and additives such as glitters. Many UK indies stopped making polish when it was realised that it costs several hundred pounds to test each polish. This sort of cost easily depleted any profit that they were making from the relatively small quantities of polish that they were selling. I know that many UK indies stopped producing polish and that at least one (Quirk 🙁 ) was reported and subsequently required by Trading Standards to stop selling.

Now, I don’t know if all the UK indies now pay to have their products tested. I asked Danglefoot, and the owner Hayley confirmed that all the ingredients from this polish were brought from the same supplier, which will soon be providing a testing service especially for UK indie makers. Although this polish has not been tested, Hayley confirmed that all the ingredients are cosmetic grade and (separately) meet EU standards.

Regardless of the lack of testing, I felt assured enough to try this polish anyway. And it’s a beauty. It’s a limited edition, made especially for the Colorostiq Manicure Box, so you won’t find it anywhere else. It’s described as a sea green, but I think it’s more blue (and I don’t much like green, so if I can describe a polish as blue, I will – it makes me feel better!). So, it’s a pale blue – with perhaps a hint of a smidge of a suggestion of a lean towards green (OK, it’s green!) – with gold flakies and a subtle scattered holo effect.

It’s almost a one-coater, and probably could be if you use a thickish coat. It dried slightly gritty due to the glitters, so needs a top-coat if you want a glossy and smooth finish.

If you buy this box, you’ll also get a code for 10% off any future Danglefoot order on its Etsy shop.

This is the first manicure box I’ve tried and I think it’s great value for four polishes for £15. At RRP, these four are worth £32. Admittedly, you can get a couple of them for less than their retail value and one is a mini. But one is a limited edition indie that you can only get in this box and the mini is a quality mini. So for less than £4 each, I think this is great value. Equally, you don’t have to subscribe to this box. If you like the look of it – and it’s not sold out yet! – you can buy it. You don’t have to make a commitment to buy future boxes.

Some really great colors in this box for September!

Yes, I love them all. My faves are the Danglefoot and the Nails Inc. But they’re all great.

Thanks for the beautiful swatches and for checking all the prices! I’m seriously temped by this box, your favourites are the same as mine, but I almost never wear red, and I think the Venice minis will be in TKmaxx sooner or later. Do you know for how long the box will be for sale?

Hi Lucina. I don’t know how long they last before they sell out, but as all the previous boxes are sold out, I think it’s safe to say they sell out within a month.