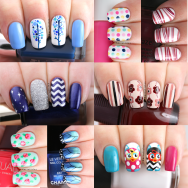 A Happy New Year to you.

I tried to limit my list to 10 manicures, as before, but I just couldn’t manage. So, please excuse my self-indulgence while I detail my favourite 20 nail art looks from 2013. I’ve ordered them chronologically, so they (in my humble opinion) get better as you go through the list.

1. China Glaze For Audrey with a water marble accent

Before this For Audrey watermarble manicure, which I did in January, I hadn’t done much other nail art. I’d done a little stamping, some glitter gradients, some half moons and a braided accent nail. This was my first proper try at water marbling, and I was really pleased with how it came out. So pleased in fact that I entered it for The Crumpet’s amateur nail art challenge, and I was stunned that I won! (It’s a nice manicure, but I think I just have lots of friends who were happy to vote for it!).

Buoyed by my success in a nail art competition, I felt encouraged to try some more techniques. These dotted flowers are my first try at a full hand dotticure. At this time I wasn’t so good at dotting. I’d practised a bit, but nothing had made it to my nails for longer than ten minutes! However, I found that flowers were really easy, and I’ve since recreated this look in green and orange too.

Again, this navy, orange and white splatter manicure was my first try at this technique. I loved the colour combinations and received lots of compliments about this manicure.

Here’s another water marble. I was even more proud of this one as it came out practically perfectly. China Glaze polishes definitely work well for water marbling.

I did this Union Jack manicure for our road’s street party to celebrate the 60th anniversary of the Queen’s coronation. Because I’m such a perfectionist, this took me ages to do, and I kept going over it when one colour strayed into another.

I created these butterfly nails with a gradient of two of the Chanel L’Été Papillon collection polishes. The Nailz Craze plates really stamp beautifully.

I was doing some nail art to launch a giveaway and thought that vintage roses would be the best thing that would show off the beautiful colours of these SpaRitual polishes.

This multi-coloured dots manicure was the first challenge manicure I did. Although they’re not original at all, I was so happy with these and loved them on my nails. I quickly discovered though that the problem with challenges is that you don’t get to keep manicures on for very long, which is a pain when you love something like this so much!

This textured gradient stripes accent manicure received a lot of views on the blog, and plenty of compliments in real life too. This was only the second time I’d worn any textured polishes and, despite being a latecomer to the textured party, I was soon taken by this popular trend.

My messy flowers nails were inspired by my tablecloth (there’s a comparison photo in the post). This was a rare example of my nail art turning out exactly as I had pictured it!

If you’re not from the UK, you’re unlikely to know about Roobarb and Custard. This animated duo were the inspiration for this freehanded nail art using the home-made decal method. Because the original cartoon used shaky drawings, I managed to recreate this pair rather well!

I loved these flowers and stripes nails so much. My lines were a little messy in some places but the flowers were perfect and the background colour showed them up so well. I promised someone a tutorial on the flowers, but still haven’t managed to do it – must try harder! This manicure and number 20, my blue and silver skittlette, are probably my favourites of the year.

I didn’t like this grey, black and white skittle manicure much at first. But it grew on me. Probably because I got lots of lovely messages about it! Gosh I’m fickle!

I created these multi-coloured half moon stud nails by painting the studs to match my polishes. The pastel colours didn’t really go with the autumnal weather at the time, but who’s to dictate when you can and can’t wear certain polishes, eh?!

My green squares nails weren’t a particularly original idea – I’ve seen lots of similar things – but I did love the simplicity of the colour scheme, and I can’t quite believe that I chose to use green!

This white on navy dotticure was another example of a manicure that just came out perfectly. It took me a year, but I finally got the hang of doing dots!

These dotted winter trees were inspired by a painting I came across. I didn’t replicate the picture very faithfully but I was pleased with the outcome and this was another manicure that received lots of compliments.

I really loved these holly stamped textured nails and wore this manicure for far longer than I usually do. The photo sadly doesn’t show up the wonderful sparkle of the textured base polish.

I wouldn’t typically choose to wear something like this on my nails, but I did this Furby Boom manicure for a Christmas challenge. I am immensely proud that I’ve created these from scratch, without referring to anyone else’s nails or getting the idea from anywhere else. I’ve searched online since and I’ve found one other instance of Furby Boom nails that were created before mine (and several older, “original” Furbies too), but I didn’t copy this idea or execution from anyone else, which made me feel like I had added a new tick against my name in some imaginary nail art achievement checklist.

Last, but not least, are my silver and blue skittlette nails. I’m still wearing these on my nails as I type this. They’ve lasted five days now, which is a long time for me.

So that rounds up my year in nail art. My favourites are these three (with apologies to those of you using a reader to read this post, as these images will show up full size again):

My nail art has really improved over the year. I wonder if I can expect a similarly good improvement this coming year?

– – – – –
All images are copyright to Kerruticles unless otherwise mentioned.
Some of these polishes were sent to me for review. All views expressed in this post are my own, honest and unbiased opinions.

Love these! Specially, the water marbles, the one with the Union Jack, the textured ones, specially with the holly, the winter trees, the silver & blue skittle …!! 🙂

I especially like your red and white watermarble, it’s so regular! It reminds me of sweeties, lol.

Thanks Alison (not sure why you went to moderation – you’ve commented before so should be able to just post away freely).

A lot of great mani’s. Pinned them to my Boards!

Indulge all you want, dahling, it’s your blog! You’ve come a long way from a year ago in your nail art & I’m proud of you for persevering. <3

Thanks Inky. I’m loving doing nail art. I have something I’m posting tomorrow that I am so proud of and which I wouldn’t even have attempted only a few months ago.

great choices – as you already know, I think you had an awesome year xx