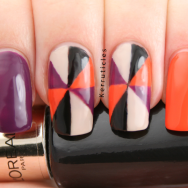 For day 23 of the Crumpet’s Nail Tarts 33 Day Challenge the theme is geometric.

A few weeks ago, while watching QI, I spotted that Stephen Fry was wearing a rather nice tie that had a geometrical pattern. This challenge had not long started, and so I was on the look out for inspiration for all the manicures. I paused the TV and quickly scribbled down a sketch, making sure to detail the colours.

Then, some days later, after a quick Google, I discovered an animated gif from the show and so I had a better representation of what I wanted to copy. I also discovered that Stephen Fry buys a lot of his ties from Van Buck, who make limited editions. I contacted them and they were kind enough to let me use a photo of one of their ties. It has the same design, but it’s not the same colour scheme as the one Stephen Fry wore:

The tie I saw – and which I have used as my inspiration for this manicure – has the same pattern, but is black, purple, orange and cream.

I’ve created a sort of pinwheel design using two L’Oréal polishes (Black Swan and Lush Tangerine) and two Ciaté polishes (Cabaret and Cookies And Cream). In hindsight, I think I should have used a lighter cream for this.

It was a fiddly job to do this, and my lines aren’t very straight. I probably should have used tape to get it looking cleaner. Anyway, I had to keep waiting for the sections to dry, and so I’ve only done two nails. Lazy, I know, but I only did this last night, and ran out of time.

Sometimes a lazy manicure ends up looking better that originally planned. At least that’s what I tell myself. I think it looks great!

Thanks – it’s all lazy manicures at the moment! 🙂