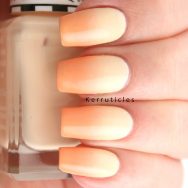 The 40 Great Nail Art Ideas group is doing pastels. I’m a bit late with this – it should have been posted last Friday – but work had to take priority last week. My personal prompt was gradient, so I created some yellow and orange pastel gradient nails.

I used to create all my gradients over a white base, but frequently found that over-enthusiastic clean-up led to there being a small bit of white undies poking out at the cuticle edge of my nails. Somewhere recently, I don’t recall where, someone revealed that they always use a nude base, rather than a white base. So for this, I tried to do the same. Initially I used Barry M Nude, but it was too sheer. So instead I tried an off-white, Barry M Coconut. It seemed to work – I don’t have any stark white poking out!

For the gradient, I used two Barry M Speedy Dry polishes. I don’t much like these polishes, and have only bought these two from the range. The colours are lovely, but I’m not very enamoured with the formula. They’re good for nail art though and gradiented well. The pastel yellow is Stop The Clock and the pale orange is Full Throttle.

I have been getting very frustrated with my make-up wedges recently. They don’t hold up well to a gradient and little bits of the sponge come off and stick to the nail. I’m now using some round foundation sponges from Sainsbury’s. They’re not a great shape for a gradient and aren’t as easy to hold as the wedges, but whatever they are made from is perfect and gives a lovely, very smooth gradient, and the sponge doesn’t disintegrate.

I was desperate to add some stamping over this, but that wasn’t my prompt, so I left them as is.

What a beautiful, simple gradient! Very sweet for Spring. I love Barry M Gelli polishes and wish they were sold more in the US. I wondered about their quick-dry. Thank you for these beautiful swatches.

Your yellow and orange gradient is so smooth!