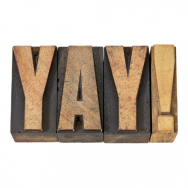 I won a nail art competition!

I am shocked! A month ago I entered a nail art competition. And I’ve just found out that I won it!

It was run by Debbie of The Crumpet, who’s A BIG THING in the nail world. She’s got tons of followers, runs lots of challenges and has Facebook groups about all sorts of different aspects of polish. So she’s somewhat of a polish legend for me.  Hers was certainly one of the very first blogs I started following when I became interested in doing my nails.

The competition was for those people with blogs with limited followers – mine had the grand total of 12 at the time. I thought I had absolutely no chance of winning, but it was the first competition I entered, so I thought it would be good experience.

I entered this manicure, which I was actually wearing at the time, and which represented my oldest untried polish, China Glaze For Audrey:

I posted on Twitter and Facebook that I’d entered, and some people let me know they had voted. But I kind of forgot about it until Debbie told me last night to look at her blog. And I couldn’t believe it, but I have won! How exciting. There was never a prize to go with the competition, but Debbie has kindly offered for me to do a guest blog post for her, which is amazing, and I’m completely scared about what I might write!

Thank you to everyone who voted – I really appreciate it.

“Yay!” image purchased from: © Can Stock Photo
All other images are copyright to Kerruticles.

aw you are soooooo cute. You were the runaway winner, so well done !! xx