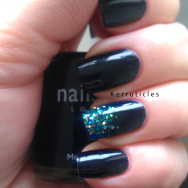 Motcomb Street and a glitter gradient

It’s my son’s birthday today, so I asked him what he thought I should put on my nails today. He said blue … dark blue.

So I chose Nails Inc Motcomb Street, which is an inky midnight blue. It’s so dark, it almost looks black after a couple of coats. I haven’t tried this shade before, having only recently received it free with Glamour magazine. I absolutely love it. Navy blue is probably one of my favourite nail colours and this one goes on flawlessly – as with all other Nails Inc polishes I have tried.

I decided on another first as well and did a glitter gradient as an accent nail on each of my ring fingers. For this I chose H&M Blue Bliss, which is a blue jelly with hex glitters in gold, silver, blue and pink/red, plus it has some tiny holographic particles. It is too sheer to wear on its own but looks great over a dark base.

Of course, when my son woke up, he was far more interested in opening presents than in checking whether or not my manicure suited his requests, but I’m sure it’ll pass muster.