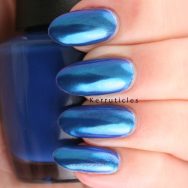 I kind of missed the chrome nails fad. I was so busy at the end of 2016 and the beginning of 2017 that I took a bit of a step back from blogging. In retrospect, it was a good move and it allowed me to have a bit of a break rather than burn out, as I’ve seen happen to so many other nails bloggers. But, that was just about the time that chrome nails had come to the fore, and while I had used some powders in a couple of different colours, I didn’t ever get around to blogging about them.

So, I now have three of the SensatioNail chrome powders and thought I’d post about them.

My favourite is the blue, shown here over a blue nail polish. I had been wearing OPI Keeping Suzi At Bay, from the 2013 San Francisco collection. And the following day, I thought I’d see how SensatioNail blue chrome powder looked over the top. So, as the polish was decidedly dry and hardened, I thought it would be fine to paint a gel top coat over it – and I was right. Sometimes if you paint a gel top coat over a nail polish that’s not completely dry, it will bubble, but this was fine and even lasted around a week with no problems. When I removed it at that point, it was still perfect, so I have no reason to believe it wouldn’t have lasted a full fortnight.

I used a no-wipe top coat from Bluesky, then scrubbed in the SensatioNail blue chrome powder, and used SensatioNail Gel Base & Top Coat as a top coat.

The SensatioNail blue chrome powder has a lovely duochrome look. It’s not as strongly evident in my photos as it was in real life, but it definitely shifts from purple to blue, depending on the angle you view the nails from.

I wasn’t so excited about the SensatioNail gold chrome powder, as it looked a bit of an antique gold, almost an olive colour, really. Even over white, it didn’t scream gold to me. Perhaps over gold itself it might work, but I didn’t try that. And I’m sure plenty of people would love it, but I’m not a huge gold lover really.

The SensatioNail rose chrome powder was also a bit of a disappointment – but only based on its name and my expectations of that. When you think of rose and chrome, you automatically think rose gold. But this isn’t rose gold. It’s more of an orange colour, which – quite bizarrely – gives a purple-orange duochrome shift when used over black. It’s a fantastic duochrome effect, and a stunning metallic colur when on your nails, but just not rose gold – my fault for assuming what colour it would be!

Here’s swatches of each of the polishes over each of white and black, with blue on the left, then rose and finally gold on the right:

You can’t quite see the effect of the blue over white in the picture, but it does give a feint metallic blue colouring.

I did do a full manicure using the rose chrome powder over black, but I didn’t do it very well and had bits of black showing at the edges. As I said, it’s a perfectly lovely colour and the chrome works well – as long as you’re not set on it being rose gold. My manicure looked just like the swatch above.


All manicure images are copyright to Kerruticles unless otherwise mentioned.
The SensatioNail chrome powders shown in this post were sent to me for review. All views expressed in this post are my own, honest and unbiased opinions.
This post contains affiliate links.
Dusky pink gel with glitterDusky pink gel…Blue geometric glitter nailsBlue geometric…

Blue is my favorite color. I love it. Thank you for this useful article.