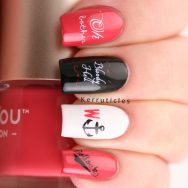 I have a swear words manicure for the Twinsie Tuesday prompt this week, the theme for which was words.

I was initially going to play it safe and do some “normal” words, but I changed my mind once I received the MoYou London Lingo 01 plate, which has a load of wonderful British phrases on it – including lots of swear words.

If you’re anti-swearing, you’re going to have to move on to the next post in your feed, as this may offend!

I am prone myself to a bit of swearing. My husband tells me off and calls me a “potty mouth”! I mainly swear in the car – at other drivers. I’m one of those drivers that curses those who overtake me as being madmen (it’s usually men) but will get equally irate at a dawdler. And when people forget what indicators are, or can’t stay in their lanes, then they will be berated too.

Don’t get me wrong here, I don’t wind down the window and give them a verbal outpouring. It’s always within the confines of the car … where I can’t be heard! (Except by my husband … sorry Paul!)

I used to be all polite and non-sweary, but these days I have Stephen Fry’s approach to it:

The sort of twee person who thinks swearing is in any way a sign of a lack of education or a lack of verbal interest is just fucking lunatic. – Stephen Fry

Despite being prone to swearing, I remained a little prudish though with these nails and couldn’t quite bring myself to put the F word on this manicure. So my index finger displays the very mild “oh bother”.

The ring finger is my favourite though. (And comes with a word of warning to my American readers: you seem to have started using this word now in the US – but it’s stronger than the way you are using it – you can’t go around calling people it over here – you’ll get yourself decked!)

Please take a look at all the other words manicures from the Twinsies this week:


All manicure images are copyright to Kerruticles unless otherwise mentioned.
Nella Milano Chantilly Cream and Nella Milano Raven Wing were previously sent to me for review. All views expressed in this post are my own, honest and unbiased opinions.
Blue Fan Brush Nails | 40 Grea…Blue Fan Brush…Dandelion Nails | Things That…Dandelion Nail…

MoYou inspired us.. swear words! XD
I did the same but in italian!

Ha ha – I’ll go have a look. I know a fair few Italian swear words – but they were taught to me by a native speaker and they are unrepeatable!

OMG I’m so slow, I was looking at the ring finger for ages before it registered! Briliant! The one on my little finger is my go-to swear word 🙂

Love the idea! And, yes, I think the f word would have been a bit much but you did a fabulous job. And the ring finger is my favorite, too! So clever!

Great idea for this theme!

I love the red, white and black together 🙂 great job on the stamping too it’s centred so well! I need to work on my stamping placement

Thanks. I used a clear jelly stamper. It completely takes the guesswork out of things when aligning the stamping.

Haha love this! I am constantly screaming and swearing at other drivers as well, but of course they never hear me either!

Haha I love these so much! Your stamping turned out so perfect!

Such a neat work <3 I simply love everything you create ^^