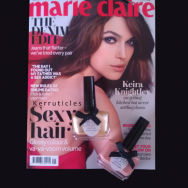 I love it when magazines give away polish as freebies. And this month (May issue) you get a free bottle of Ciate nail polish with Marie Claire magazine.

There are two colours to choose from: Sand Dune, a shimmery gold colour; and Pocket Money, which is more difficult to describe. It looks like a pale peach in some lights, but more like the colour of brown Plasticine in others. Certainly I have nothing like it at all in my stash.

The magazine costs £3.80, and Ciate polish normally costs £9, so it’s a great deal. Even more so if you buy it at Sainsbury’s, which has a deal whereby you get £2 off when you buy any 2 certain magazines – and Marie Claire is one of them. So you can get them both for £2.80 each. Bargain.

I haven’t worn either polish as yet, but here are some pictures of them in the bottle and swatched on a nail wheel.

My ever lovely husband picked both of them up for me. But before he found them in Sainsbury’s, he’d visited two branches of WH Smith, both of which had the magazines, but without the polish in them. They were plastic wrapped, but there was no mention of the free polish, which there was – prominently in a big pink circle – on my other copies of the magazine. I wondered why this was, and tweeted Marie Claire, but they didn’t answer.

I have been really impressed with the Ciate polishes I have tried so far. I’m currently wearing Power Dressing, and have tried a few others that came with last year’s advent calendar. So I’m looking forward to wearing both of these.

I had a look in WHSmiths too, it looks as if they’re doing a different offer where you get 2 mags (Marie Claire + something else) for a certain cheaper price, which I reckon is why they’re in clear plastic wrap but without the free varnish.

Aha – that would make sense. I would rather have the polish any day! I don’t even read magazines.

Just got the sand dune and its such a bargain compared to the rrp for ciate! Ur tempting me to get pocket money too xx

I still haven’t worn it yet. It’s a really strange colour and I can’t decide if I like it or not. Will have to wait and see it on, I think.