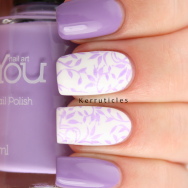 OPI Do You Lilac It? with Lilac Stamping using MoYou Nails

I was offered some items by MoYou Nails for review and chose a lilac stamping polish and a couple of plates. They also sent a stamper and scraper.

I chose lilac as I already have white and black stamping polishes, so wanted to try out another colour. It stamped well for such a light colour and proved to me the value of buying proper stamping polishes. I know that a lot of “normal” polishes will stamp well too, but it’s usually the darker colours. I’m now convinced of the need to get some light colours for stamping: yellow, light blue, pink, etc.

I stamped over white, and think it would also work nicely over a purple, and paired it with some plain nails in OPI Do You Lilac It?, which is just a touch darker than the MoYouNails stamping polish.

The scraper is similar to Konad ones, except that it’s entirely made of plastic. I have never used my metal Konad scraper, so can’t compare them in terms of use. I always use an old credit card and the MoYou Nails scraper works exactly the same as that.

The stamper is quite small, certainly in comparison to all my others, but it’s perfectly large enough to use. The stamper head is about the same size as my Konad one, and has the same pliability, although looks a little shinier and feels a little stickier than my Konad one.

The images are nicely etched into the plates so they picked up and transferred well. They are long enough for my nails, even when they’re at their longest, which is a few millimetres longer than they are currently. However, the images are a little narrow, and while they (just) fitted on the two centre nails, they only covered about two-thirds of the width of my thumb nails, and were a little too narrow on my right hand, where each of the nails is a couple of millimetres wider than those on my left hand.

Here’s a look at what I received from MoYou Nails. The catalogue showcases a lot of the company’s products, along with details of some new stamping polishes for summer (turquoise and orange caught my eye), plus some stamping plates that are coming soon. The pictures of the full nail images look promising, as they look wider than the ones on the plates I was sent.


All manicure images are copyright to Kerruticles unless otherwise mentioned.
The MoYou Nails polish and MoYou Nails stamping plates, stamper and scraper were sent to me for review. All views expressed in this post are my own, honest and unbiased opinions.
Multi-coloured Polka Dots over…Multi-coloured…Neon Gradient SkittleNeon Gradient…

This is so light and pretty! Nice stamping. 🙂

These looks great!The colour combination is great and the design you’ve stamped is so pretty! 🙂