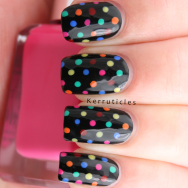 Renowned nail artist Michelle Humphrey (who paints Lily Allen’s nails) recently posted some nails she called “disco dots”. Now, I remember the disco era (a bit too well), and I recall having a piece of clothing that was just like this manicure: multi-coloured dots over a black base. Unfortunately, I can’t quite fully drag the memory from the recesses of my ageing brain, so I’m not sure if it was a top, or a skirt, or what. I just remember it having slightly raised dots. And it was certainly during the time of disco.

I’ve created my own version. At the time, I wasn’t referring to Michelle’s manicure, but I seem to have chosen some very similar colours!

I started with a base of 2 coats of Graffiti Nails Jet, then dotted on the colours. I chose a range of Barry M colours: Blood Orange, Lemon Ice Cream, Kiwi, Damson, Mango and Pink Punch. The pink, blue and green are all from the new Summer Gellys collection.

I had to go over some of the dots a second time to get them to stand out against the black, particularly the orange and the yellow. But I made a bad choice with the red, as it doesn’t have much contrast with the black at all.

I reckon this would look fabulous with some neon polishes.

This is the original that I copied:

Total perfection! I love it!

I think your red was a great choice – it gives more depth to the mani.