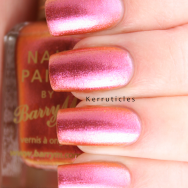 I spotted the new Barry M Aquarium collection in Superdrug on Tuesday. There are four duochromes and two glitters.

Both glitters are shard glitters and I wasn’t sure I’d like them, so I gave them a miss. But I bought two of the four duochromes; the darker shades – this one and Pacific, which is a blue/green duochrome. The other two shades that I didn’t buy were the lighter pink/gold (Caspian) and the green/gold (Arabian).

I wasn’t sure whether or not I’d like this one, but I was really pleasantly surprised by it. The first coat was quite sheer and took a little longer to dry than is usual with Barry Ms. The second coat gave sufficient opacity though. And I didn’t find it at all streaky either by the time it dried and had been topcoated.

You can’t see the colour shift so well in the above image, so I did something atypical for me and I took some more shots so I could get a different angle. So here, below, you can clearly see the difference between the gold on the index finger and the pink on the little finger. (You lucky people, getting two photos from lazy old me who only ever shows one! Don’t go getting accustomed to it though. It won’t be happening all that often!)

I swear these are the hardest duochromes to photograph! I may have bought the whole collection, Barry M and duochrome is a terribly dangerous combination around me

With your great manis it is really a pity 🙂 I love staring and them and then trying to recreate.

One question, do you think Barry M is somewhat similiar with colour shift to Sally Hansen Lustre Shine Lava? I got SH Lava and maybe can avoid buying next polish 🙂 ? It is hard to get Barry M in my place, but I’ll be in London first week of June, so wondering about those two and how similiar they are…

I don’t personally know Sally Hansen Lustre Shine Lava, but I’ve just looked at some pictures and they do look very similar.