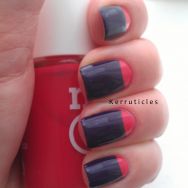 My husband hates this manicure, but I love it. He says the colours don’t go. Well, that was the idea really: to use contrasting colours in order to get a stand-out effect. But you can’t win them all.

The pink half moons are Models Own Raspberry Crush, which was one of the freebie polishes I received with More magazine recently. Prior to this, I didn’t own any Models Own, but if all their polishes are like this, then that won’t be the case for very much longer. The formula was almost perfect. It went on so beautifully for me and dried nice and quickly too. I think “raspberry” is a bit of a misnomer though. Although it does seem a bit reddish in darker lighting, I would more accurately describe it as a deep pink.

The rest of the nail is Barry M Gelly Hi-Shine in Plum. However, my bottle is labelled as “Blackberry”, which I know, from various reports on other nail blogs, is how some of the early bottles were (mis)labelled. This is just one coat, and it went on even better than the Models Own did. I love the Gelly Hi-Shine polishes. They really are true one-coaters and dry with a fantastic shine.

For the first time, I haven’t done too badly with my half moons. Before now, I have always managed to splodge at least a couple of them as I remove the ring reinforcers.