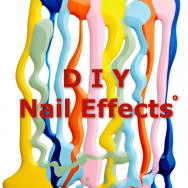 Texture on nails is the new black!

It seems that UK brand, Ciaté, is pretty much always the innovator. They were first to bring out the caviar manicure and the velvet manicure. Although very soon online retailers were selling cheaper versions of both.  And then – for those of us in the UK – MUA brought out its really inexpensive versions: Constellations and Fur Effect nails.

But beating Ciaté at their own innovation game, a number of polish manufacturers have recently launched ranges that mimic various other textured finishes:

But what if you’re not sure if you will like the look or not? And what if you don’t want to spend the £11-19 necessary for a bottle of one of these polishes?

Well, the ever-resourceful blogging community has come to the rescue and two bloggers have come up with DIY versions of these manicures.

So, if you’d like to try out “liquid sand” or “concrete” nails, then Katie and Alli at The Daily Varnish can help you, with their DIY Liquid Sand Manicure post.

The results are very similar to the real thing and will cost you a whole lot less. All you need is some embossing powder, which you can buy from a craft shop. For the concrete nails look, you don’t need anything else, but if you want the liquid sand look, then you can add glitter or you could even use glittery (or holographic) embossing powder. The powder seems to cost around £5 – cheaper in some places – and that’s less than half the price of a bottle of OPI or Nails Inc.

Just make sure you don’t go putting your nails under a hair dryer or anything similar: embossing powder is designed to expand when sustained heat is applied! [EDIT: see comments below].

I think Danielle has done a great job with her version. In my opinion, it actually looks even more like leather than the Nails Inc’s polishes do.

Happy DIY-ing! Let me know how you get on!

Ah … thanks for the info about the heat required to activate embossing powder.