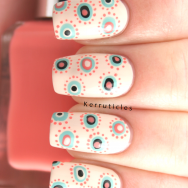 Right at the end of last year, Debbie from The Crumpet named mine as one of the blogs to watch in 2014. I felt so honoured to be named alongside some truly brilliant nail artists. And very flattered to be named as such by Debbie, who is the undisputed star of nail bogging in the UK.

Now, I’ve been privileged to be invited to guest post for The Crumpet blog, which has left me even more excited.

I agonised over what nail art to create for my guest post. It needed to be something laudable enough to warrant being showcased on Debbie’s fab blog. I don’t really think I’ve particularly succeeded, but you can make your own mind up by popping over to The Crumpet and having a look.

I do have some photos here, but the description and detail is on Debbie’s blog post.

I usually only take one photo for my blog, but took another for Debbie as she has several photos for each look.

My manicure isn’t an original design; I’ve taken it from a pattern I saw while browsing on Pinterest:

Go Claire! I told you that you were better than you thought you were. Now you have proof from The Crumpet herself. <3

I saw you were on her list and was wondering if you’d do a guest post. How cool!