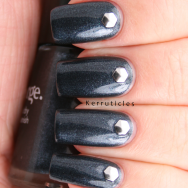 George Deceit with Hexagonal Studs: D is for: Dark

For D this week in the A2Z series challenge the prompt is dark. I was pushed for time, so I created a fairly plain manicure using George Deceit and some hexagonal silver studs.

I bought Deceit along with three other polishes at the weekend. I was in an unfamiliar town, killing time while my son sat a grammar school entrance test. After I had trawled all the polish shops and found nothing I wanted to buy, I came across an Asda and thought I’d have a peek at the George polishes. I don’t have an Asda that near to me, so I rarely go. I’m glad I did though, because I found some lovely polishes – this one included – and although they were priced up as £1.79, at the till they were 50p. Super bargainous!

Deceit reminded me of Essie Cashmere Bathrobe, but on checking, they are different. The shimmer particles in Deceit are smaller and give a more blue overall tone than you get with Cashmere Bathrobe. It’s a find though for 50p as it goes on well in two coats and is a lovely colour for this time of year.

The silver hexagonal studs were bought from She Sells Seashells.

Here are the manicures from the other A2Zers:

Gorgeous. And what a steal! Love these x