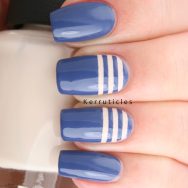 I posted on Twitter the other day about being lacking in nailspiration. I seemed not to be able to think beyond stripes, chevrons and zig zags. Several kind people prompted me with some ideas, but I’ve come back to stripes. Again. I do love them.

I got it into my head that cream stripes over blue would be nice, and picked out this lovely shade of blue from Rimmel, called Navy Seal. It’s what I would describe as an “airforce blue”, but I suppose the Navy is still one of the armed forces, so fairly close! It was a little runny and pooled at the cuticles on some nails, but otherwise went on well, with two coats needed.

The striped nails were previously prepared with a base of two coats of OPI My Vampire Is Buff, plus some Nail Vinyls strips. I was going to stripe the whole nail, but changed my mind and limited it to three stripes each. I think it looks rather cool like this.

I love simple stripes when done right, and these are done perfectly! 🙂

Thank you Jessica – and thanks for the RT 🙂

This is so cute! I love a good striped mani! x x

I absolutely agree with Jessica. I adore your nail arts which are realized always splendidly. You are one of rare bloggers from whom I wait for posts.
The choice of colors, their association are in more always haughtiness and your today’s nail art is of a rare elegance. But they are always and every time, I feast.
“I seemed not to be able to think beyond stripes, chevrons and zig zags”. Yes, well, so what ? You love that and you take pleasure to make it ? It feels and it is so pleasant for me.
And then, I do not agree with your observation. I did not like the water marble, but really not. Up to your post of April 9th. And there, I was open-mouthed and I revised my opinion on this technique. Et oui !

Very understated yet very striking. I love it!