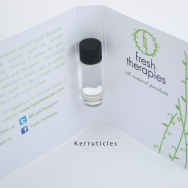 I spotted the Fresh Therapies Natural Nail Polish Remover in Scratch magazine and thought it looked good.  It’s supposedly more gentle on your nails and cuticles, leaving them less prone to dehydration, weakness and cracking.

Sounds good to me. My nails are dry, weak and tend to split, peel and crack and I know that my regular use of acetone contributes to this. However, I do always try to moisturise my hands and fingers at least once a day, and use cuticle oil once or twice a day too. This regime seems to help, but if I could still do that and use a better polish remover as well, then that would be the best situation.

So, I purchased a sample of this polish remover to try out. I was quite surprised when it arrived and it was in a teeny, tiny bottle. I haven’t measured it, and it doesn’t say, but my guess is that it’s about 2 or 3ml. It was only £1 though, including postage, so not too much to splash out.

To test the remover, I removed the polish from a manicure where each nail had the same on it. I removed one nail using my usual acetone (with a touch of glycerine) and one with the Fresh Therapies remover. I used a lint-free pad and kept in on the nail for about ten seconds, before swiping the polish off the nail.

With the acetone, this took four swipes in total and all the polish was gone, except a little under the free edge, which I typically clean off using a brush afterwards.

With the Fresh Therapies remover, it didn’t break down the top layers of polish anywhere near as successfully, and the first three or four swipes only took a small amount of polish off.  I ended up using twenty-one swipes to get all the polish off, and had to employ a bit of rubbing too. Because it doesn’t evaporate like acetone, it left my nails wet, which I’m not used to. But it did smell nice; it had a lovely lime freshness.

So, what’s my verdict? I was disappointed. This remover just doesn’t work as well as acetone, and I wouldn’t buy it. (Those of you who use non-acetone remover may find it’s comparable though).

It’s also very expensive. A 50ml bottle costs £8.99 (plus £3 postage and packing). I buy litre bottles of acetone from Sally’s for £6.49. So my acetone costs 32.5 pence for the equivalent amount that I’d get in a bottle of £8.99 Fresh Therapies remover. If you look at it the other way around, the price differential is clearer to see: that would be nearly £180 for a litre bottle of the Fresh Therapies remover.

Much as I like the idea of using a more natural product that doesn’t dry out the nails so much, it didn’t work as efficiently as acetone does, and it just doesn’t make financial sense, especially seeing as I get through so much remover.

I saw this (or something similar) back when I cut my nails off for the SpaRitual Protein Boost review. I thought it may compliment the vegan niceness. I didn’t look into it much though and reading this I am glad I didn’t!