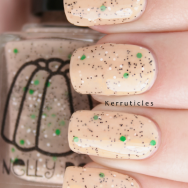 This is another Nelly Polish – the UK indie polish that can be shipped anywhere in the world thanks to the fact that it comes as a dry mixture, ready for you to make up with any clear polish.

Gumpas is very sheer and on a nail wheel I had used three coats and not got near enough to opacity for my liking. I have very yellow nails from staining, so that wasn’t going to be any good for me. So instead I decided to layer it over a neutral base.  To layer it over something like Barry M Lychee would have been perfect … but I don’t own it! So I put it over Sally Hanson Beige Blast.

Beige Blast is a little lighter than Gumpas, but it’s the closest colour I have. It too is very sheer though, so I ended up having to use four coats of it!

I used three thin coats of Gumpas over the top, but I think two thicker ones would have been fine. Nelly Polish dries matte due to the natural pigments in it, so I added a top coat for shine.

Invented by Hilary Tunley, the dried “Nelly Mixture” includes the natural pigments, the glitters, mixing balls and a suspension ingredient. To turn the mixture into polish, they are added to an ordinary bottle of clear nail polish and shaken.

Hilary’s invention is a great solution to the UK restrictions on posting nail polish out of the country. She provides the custom ingredients, which are perfectly safe and legal to post worldwide, along with a bottle to make the polish (if you like). All you have to do is provide 10ml of clear nail polish. As it’s only the solvent part of nail polish that the Royal Mail objects to, it can be shipped worldwide.

Nelly Polish is available on Etsy. You can buy the mixture only for £4; the mixture including an empty bottle for £5; or a ready made up bottle for £6.50. Made up bottles can be shipped within the UK, but the other packages of dry mixture can be delivered worldwide.


For this manicure I’ve used:

– – – – –
All images are copyright to Kerruticles unless otherwise mentioned.
Products shown in this post were sent to me for review. All views expressed in this post are my own, honest and unbiased opinions.

The logo on the bottle is adorable! These really intrigue me. If the right colour pop’s up I think I may give it a whirl.