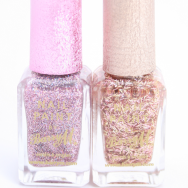 When the new Barry M polishes came out last week, I quickly nabbed the red matte one, Crush, along with two of the textured polishes (Duchess and Countess). But while in Superdrug, I also spotted two limited edition polishes and bought those too.

The first one is a pink holographic glitter, called “E” (or as it reads on the side label, NPLESE). It’s in a clear base and is fairly densely packed. [EDIT: I’ve since found out it’s name is Fairy Lights].

The second polish, “F” (NPLESF), is pink and gold bar glitter in a clear base.  [EDIT: I’ve since found out it’s name is Gold Dust].

Both polishes have the funky, foiled caps that last year’s Boots and Superdrug Christmas limited edition polishes had. They were £3.99 each.

I haven’t tried either polish as yet, but I’ve swatched them on a nail wheel and like them both.