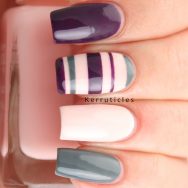 I have some pink, purple and grey stripes nail art, courtesy of Diabolical Nail Varnish.

Diabolical Nail Varnish has been specially created by Firebox.com. These three polishes come as a set, presented in a pink box, and are inspired by Wes Anderson’s stylised film, The Grand Budapest Hotel.

I absolutely adored the film. I hadn’t seen any other Wes Anderson films before, so I didn’t know how distinctive his style was. In the first few minutes of watching it I thought it all rather strange and was going to give up on it, but gradually I realised I was gripped by the story and was loving the quirky and distinctive narrative style.

These three polishes have been designed to reflect the colours and grandeur of the mountain hotel, presided over by devoted concierge, Monsieur Gustave H.

Dynamite in the Sack is a dark violet shade. It is a lovely vampy purple that reflects the colour of Zero the lobby boy’s uniform. It has a nice consistency that flows well onto the nail. I really like the brush, which is long and straight with a flattened wand part – like the Sally Hansen Insta-Dri brush, but perhaps half the width and with a straight-cut top. It dried averagely quickly – not too long, but I wouldn’t call it fast drying either. “Dynamite in the sack” is how M. Gustave describes wealthy hotel visitor, 84-year old Mme D!

Enchanting Old Ruin – a term used to describe the hotel in the film – is a grey that sometimes leans slightly teal green. This is also a good cream, like the purple. There’s quite a lot of grey in the film that must have inspired this: M. Gustave’s waistcoat, his prison uniform, the uniforms of the soldiers and the colour of the mountain scenery.

Physically Repulsed is a sheer pink. This is the only one of the three that I was slightly disappointed with, from a nail art point of view. To fit with The Grand Budapest Hotel theme, this pale pink colour is perfect. It is the colour of the Mendl’s cake boxes in the film and is the colour of the hotel itself. However, this is a very sheer polish so it doesn’t show up as very pink on the nail. It would be great worn alone or used for a French manicure, but my nails are far too yellowed for me to show it off well. The name of this polish actually has a nail polish reference. In the film, M. Gustave and Mme D have a scene that plays out thus:

M. Gustave: “Oh, dear God, what have you done to your fingernails?”

M. Gustave: “This diabolical varnish; the colour is completely wrong!”

M. Gustave: “It’s not that I don’t like it; I am physically repulsed.”

Because it is so sheer, I have used it here over a white, which brings it to a more solid colour. I did still need four coats though to make it opaque enough to show up the colour well.

You can buy this Diabolical Nail Varnish set from Firebox.com for £12.99. I have a great fondness for Firebox.com. At the time it launched in the late 90s, I was working for an internet consultancy. This was before the internet bubble burst and at the time, it was such a small industry that we seemed to know everyone in it. So, I knew Firebox.com from the off and have admired their approach ever since. If you ever need a quirky or original gift, they are certainly the place to look first.


All manicure and product images are copyright to Kerruticles unless otherwise mentioned.
These nail polishes were sent to me for review. All views expressed in this post are my own, honest and unbiased opinions.
Summer Gradient | 40 Great Nai…Summer Gradien…Geometric Molten Metals | Twin…Geometric Molt…

I love your stripes! The colors go well together and I like the different sizes to it too.

Oh wow I also reviewed this set and felt the same about the movie. I’m glad I didn’t turn it off though, it was such an amazingly weird movie in the end. Your mani is gorgeous, as always.
Vicky xx
@thepolishlist