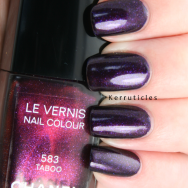 I have been desperate to get hold of Chanel Taboo ever since I first saw it. It launched about a month ago in the US, but Chanel polishes tend to come out a little later over here. The lady at one Chanel counter I visited said it sometimes takes more than a year for products to launch in the UK. A blog I came across said it would be available here in June, and another Chanel counter said it would be launched after the Summer 2013 collection.

Having missed out on buying the one other Chanel polish I want so much – Malice – I didn’t want to miss out on this one. (It turns out it’s a limited edition, but I didn’t know that at the time).

So I hatched a plan to get it from the US, but before that could come to fruition, I discovered that it was already for sale in the Chanel Boutique in Bond Street, London. My wonderful husband walked from Westminster to Mayfair during his lunch break to go and get it for me. I was so excited!

It’s undeniably a beautiful polish. The application was perfect. It went on flawlessly and only needed one coat, although I used two just to neaten up some of my edges, and also to see if it added some depth to the shimmer (which it didn’t).

It dried very slightly rough, due to the shimmer particles, so needed a top coat for some shine.

My only disappointment is with the overall effect when seen indoors. In the bottle it has a wonderful duochrome look, with  an orangey-red shimmer. But this really doesn’t translate to the nail indoors. You can see it outside, in the sun, and and then the blue and red-orange particles glint momentarily as the sun catches them and the whole manicure  sparkles and shines. But indoors it just looks like a deep purple with a hint of silver shimmer here and there, which is a little disappointing. But I’m still in love, and am so pleased to finally get my hands on it.

It’s clear and sunny today here in South London, so I could at least appreciate this polish in its full glory.

This looks lovely on you! You were so lucky to get it in London – I have a bottle in the mail from a friend in Texas; I was far too impatient to wait for the main UK release!

Husbands… They go to such great length for their beloved wives. It’s the cutest thing.

Hello Claire! I am sorry for sneaking into your blog like this but I have been reading a few of your posts lately and I noticed that you would like to find a bottle of Malice. Well, today I passed through the Chanel Covent Garden store (cosmetics only and doesn’t have Taboo, but will have the Summer collection on the 24th May) and I saw a bottle of Malice on their testers. Possibly, they may still have some in stock. Here is a link to their page

Thank you very much for the heads up with Taboo 😉 I don’t think I will wait for June to have it! Take care.

Sonia – thank you so much for taking the time to let me know this. My husband went today to get it for me. I am delighted 😀 😀 😀 They had a few more bottles too, in case anyone else is looking for it. (And he also pre-ordered me ALL THREE of the summer collection as an early anniversary present – he’s really in the good books!)

You’re most welcome Claire 😀 I am glad I could help! I wasn’t expecting to see it there too. Awww that is so sweet of him 😀 and he has excellent taste too! I have my eye on two summer shades 😉