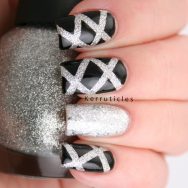 This week for the 40 Great Nail Art Ideas group, we’re posting New Year nails. I have some party nails, done with a black and silver laser pattern.

They are inspired by the nails that first got me interested in nail polish, back in 2011. I was going to a 40th birthday party that had a “black and bling” theme. To finish my outfit off, I wanted some nice nails, but I only ever really painted my nails once or twice a year back then, and I only had a few bottles of polish – mainly reds and pinks. After some Googling, I discovered Minx and nail wraps and found some wraps that matched my dress really well. They had this exact design on them.

Although I didn’t really get on with nail wraps, I did like having my nails “done”, and a few months later, I started buying polish. The rest is history.

I often think of this design when I think of parties or New Year. Recreating them seemed the obvious choice for this theme. This time around though, I’ve used nail vinyls and polish … not nail wraps.

These are the “original” nails that I did in 2011, using nail wraps:

Awesome looking black and silver laser nails! I like how thick the lines to it are too.

Just beautiful – simple and sophisticated! I also like the thinker lines!