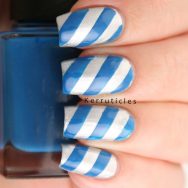 I have these silver and blue diagonal stripes for the Tuesday prompt of “inspired by your childhood” this week.

If my nails look quite obscure and not particularly reminiscent of anything to do with childhood, it’s because they are inspired by my old school tie.

My senior school was built in 1977, which was the same year as the Queen’s silver jubilee. Although the school logo at the time was royal blue, navy and white, the silver was apparently added to the tie to honour the Queen in her jubilee year.

And the tie was alternate silver and royal blue diagonal stripes. I don’t think I have the blue colour quite right. It was more than thirty years ago now, but I think the jumper was more this sort of blue, but the blue on the tie was a bit darker.

I used Barry M Foil Effects Silver for the base. It only needed one coat and was perfect. Barry M discontinued the Foil Effects polishes a few months ago. At the time I wondered (and hoped) if it was because they were going to launch a whole range of metallic polishes to replace them. Well, they have sort of done that with the recently launched Molten Metals. But they don’t stamp anywhere near as well as the foils did. So I’m still disappointed – as are hundreds of like-minded nails bloggers – that you can no longer get hold of the Foil Effects polishes.


All manicure images are copyright to Kerruticles unless otherwise mentioned.
Nalla Milano True Blue was sent to me for review. All views expressed in this post are my own, honest and unbiased opinions.
Pink Floral using Essie Coacha…Pink Floral us…Neon Green & Blue Mermaid…Neon Green …

Some great looking diagonal stripes here in silver and blue!

These look so perfect!! Great job!

Great inspiration! I remember wearing a tie for school too! Too bad the polish was discontinued 🙁