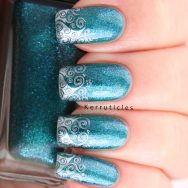 The two choices for this week’s 52 Week Pick n Mix Challenge are 3 neons or oceanic. It’s been miserable and rainy this morning, making neons out of the question. And so I have instead some oceanic nails using Sally Hansen Sparkling Water for the sparkly green-blue base with some waves stamping.

Sally Hansen Sparkling Water is a very apt name for the polish and one which ties in well with the theme of this manicure. It’s a teal jelly, packed with tiny glass flecks in blue and magenta. They may even be duochromatic flecks that switch between blue and magenta – I can’t quite tell. It was a gift from my neighbour (thanks Marie 🙂 )

I painted two coats – because I was going to stamp over the base – but if I was to wear this polish alone, I would use three coats, for a completely opaque look. Otherwise the nail tips have a tendency to look a little yellowed. It’s a bit of a stinker, this polish. But it looks nice, and the end justifies the means, as Machiavelli (nearly) wrote, so the smell until it dries is bearable.

The stamping is done with Barry M Foil Effects Silver, using Born Pretty Store plate BP-18. It has a swirly pattern, that looks like waves. I’m not entirely sure if they are or not, especially because the design looks like it should be used sideways across the nail. But I used it to give a French tips look and just placed the image at the ends of my nails.

And look! A third image from me. That’s twice now that I’ve used three images. Last time, you even got to see my thumb, which appeared only very rarely at the beginning of this blog.