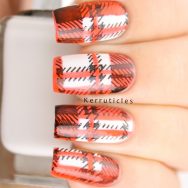 These black, white and orange tartan nails are for the 40 Great Nail Art Ideas “books” prompt.

I don’t read anywhere near as much as I would like to. It’s all my son’s fault. Before he was born, I used to read about one book a week. Admittedly, I commuted into central London every day, so there was plenty of time on the train. But I also used to read in bed at night before going to sleep, so really used to be quite a voracious reader.

Then, nearly thirteen years ago, my son was born and suddenly I had no time to myself. I also became self-employed so no longer had a commute. And my son was nicknamed POD for a long time, meaning Prince of Darkness, as he was awake all night (and day too a lot of the time!) so you can probably tell that I didn’t get much night-time reading done either.

So, in the past thirteen years, I have read precisely eight books. Eight. That’s not even one a year. I’ve read: The Alchemist by Paulo Coelho; Saturday, On Chesil Beach and Sweet Tooth by Ian McEwan; Suggs’ autobiography That Close; and A Long Way Down, Slam and Funny Girl by Nick Hornby.

I read the last book in that list – Funny Girl – just a few weeks ago while I was on holiday. This nail art takes its inspiration from the paperback cover, which shows a black and white photo of a young woman wearing a tartan dress, with the book title written in orange. So these black, white and orange tartan nails are the result.

On a white base, I stamped the tartan image in black, using Jordana Black and an image from MoYou Nails 401.

I added in the orange afterwards using a W7 jelly polish, Orange Crush. I painted it on just using the brush and a striping brush for the thin lines.

I’ve had a bit of a nightmare with these nails. I should have top-coated the stamping before adding the orange, because it has smeared it quite badly. They look great at arm’s length; just not so much close up in a photo. Then I’ve managed to capture a bit of my light tent in the top left corner of one of the shots. It’s out of focus, so just looks like a bit of a blur, but all the same, I’m not happy. And finally, I had to adjust the colour balance on the images quite a bit, as the orange was looking red. So that’s made my fingers look yellow. It seems to have been “one of those days”.

Love the black, white, and orange combo to it.