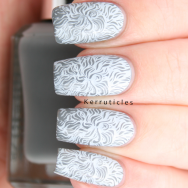 Barry M Chai Stamped with a Wavy Pattern: F is for: Fashion

The theme this week in the A2Z series challenge is fashion. My inspiration for this manicure is a Dolce and Gabbana dress for Autumn/Winter 2014-15 (see below), which I have had pinned for some time.

I haven’t copied the black, cut-out appliquéd material that you can see on the dress, but I certainly tried before giving up.

I started with Barry M Chai as the base. It only needed one coat to be perfectly opaque, which makes it a classic Barry M Gelly.

I found the ideal image to stamp with to create the white swirly background of the dress. It’s on Winstonia The Carnival. From a distance, it looks perfect, but I see now in the pictures that it has some tiny missing spots. (Just don’t open the image and zoom in! … You just did, didn’t you!)

Then I tried to add the black detailing. At first I thought I’d copy the dress exactly, and I taped off a vertical strip and top and bottom horizontal strips so that I could stamp just in two blocks at the sides of my nails. The stamping just didn’t look right though. It was such a small area, and the image on the stamp wasn’t dense enough and it just looked as if I’d painted a few random tiny black lines and splodges on my nails.

Then I thought to keep the inner two nails as they were, and stamp a black cut-out pattern over the outer two nails. I tried with three different images, but again it just didn’t look right; none of the images had small enough, nor dense enough detail. So finally, I gave up and kept it as it was. I was lucky that each time I had been able to remove the stamping with a lint roller, as after all that, I wasn’t about to stamp it again!

Here are the manicures from the other A2Zers:

Regardless of the dress, that lacy, organic stamping image is divine — I love this manicure!

These are gorgeous – I love your inspiration. I hate when manis don’t work out the way you want them to despite all your best efforts but sometimes when the base is this stunny it doesn’t matter!