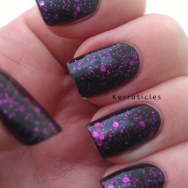 Hello. (I think I’m only talking to myself at the moment, though!)

I’ve recently become rather addicted to nail polish. I’ve been sharing my manicures on Facebook and I’ve mainly been boring or annoying most people. Judging by some of the comments, some of my friends seem to think that I am not busy or that I have too much time on my hands because I’m manicuring my nails two or three times a week.

I’ve tried to explain that  it it really doesn’t take that long. And I’ve resisted the urge to scream that it’s a hobby … what’s wrong with spending a few hours a week on my hobby?

So, all in all, the people I am friends with on Facebook really aren’t interested in what I have on my nails. So I’ve set up this blog, as well as started new Pinterest and Twitter accounts, all to feed and fuel my nails obsession. And through them I hope to find more like-minded people.

I’ve only really been doing my nails for the past two months. But in that time, I’ve already amassed a large collection of polish (119, not including top and base coats) and stamping plates (more than 75), along with various nail art tools and decorations.

This is what is on my nails today: W7 Black Cherry (yesterday’s manicure), layered with Revlon Scandalous.