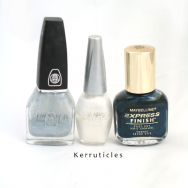 This fortnight’s question for the British Nail Bloggers is “What’s your oldest polish?”

I wasn’t entirely sure which is my oldest polish, but I have narrowed it down to three. Each of them was bought way before my nail polish obsession started. I only really began painting my nails about a year ago. During the fifteen years before that, from age 30-45, I had a few nail polishes, which I used very occasionally, but mostly for my toenails. I don’t really remember having polish when I was a child or a teenager. I was really quite a tomboy and makeup and nail polish didn’t interest me at all.

In my twenties though, I went to a few work dinner dances and balls, and that’s when I bought a few nail polishes. I bought them to match outfits. I recall a blue ball gown that I wore with a paler blue wrap. I think that’s where the two blue polishes hail from. The shimmery ivory colour though – I have no idea. I’ve not worn the darker blue much, as it’s nearly full, but the other two are more than half empty.

Maybelline New Year’s Blues – I’m not sure how old this is, but it is described online by many as a “vintage” polish. It’s a deep blue with turquoise shimmery particles. It’s a lovely colour, but really chokes you when you apply it because it’s full of nasties.

Oil of Olay Waterfall – Oil Of Olay don’t even make polish any more, at least not in the UK, so this is an oldie too. Waterfall is a pale silvery blue that also smells strongly of what are probably carcinogenic chemicals.

Maybelline Colorama – I think this is probably the oldest of the three. It doesn’t have a name or number, unless it’s come off over the years, so I’d love to know what it is called. I’ve searched online and there seem to be similar colours still available. It’s an ivory white colour with a pearlescent finish.

Do have a look at the other British Nails Bloggers’ oldest polishes:

I think the blue maybelline is the one I mentioned having from about 1998 in today’s blog post! I found the wear time awful on it and it’s one that didn’t inspire to buy any more by them until now, I have Chalk Dust on my nails at moment. I’d forgotten Olay did polish, I had one of them in my late teens, again circa 98! I just don’t still have any now.

I’m about four days behind in reading my blogs, so haven’t seen your post yet. Will go and search it out now. 1998 would make sense. I don’t think I’ve worn it since then. Might try it out again one day, as it’s my sort of colour. Just not sure I can put up with the smell while I’m doing it though!

I have the Maybelline one too! I actually really like it, i think it has a nice formula and fast dry time 🙂
Not sure what my oldest polishes are, i don’t often get rid so am guessing there’d be a few haha! Great post x x x

I will definitely try it out then if that’s the case. I’m just not sure on the smell – a nose peg will be needed!

I have an orange L’Oreal I remember buying in 1994, and a pink Elizabeth Arden that I know is older, but I can’t date exactly.