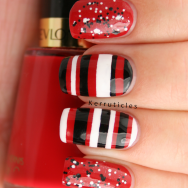 A while back, someone was asking in a Facebook group what to do on their nails and I suggested red, black and white stripes. Someone else remarked that they could imagine that on my nails. And I agreed – I guess I’d suggested something that was very “me” – so, I chose to paint it myself.

I started with two coats of Revlon Red, then added my stripes using W7 Black and Sinful Colors Snow Me White. They were mostly done with the aid of Nail Vinyls, but a couple were freehanded.

On the index and little finger nails I added a coat of L’Oréal Confettis.

My index fingernail broke at its eternal weak spot, the outside corner, so I filed it down a little. [I wore this manicure about three weeks ago – the nail was just about regaining some of its length, but yesterday it had an altercation with a veg peeler and so I’ve had to trim all my nails down now – they’re the shortest they’ve been in a very long time 🙁 ] Also, I have a little tip wear on this nail as I wore the red alone for a day. I should have filed it down or repainted the edge before photographing!

Hello, this manicure looks so lovely!

I’m very excited to share with you that I’ve chosen one of your manicures, that you’ve sended to the Random Nail art Community, to be part of my top 5 favorite nail arts! You can find the article using this link:
http://www.creativenails4fun.blogspot.nl/2014/09/do-you-know-random-nail-art-community.html

I’m looking forward to read your next post darling!
Julia