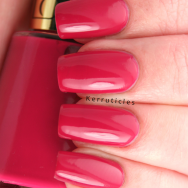 Revlon Cherries In The Snow

I bought Revlon Cherries In The Snow for £2 in The Original Factory Shop. It’s one of my favourite places to stalk inexpensive polish.

Despite its name (cherries are red, surely?), it’s a pink colour and it’s very sheer and runny. As with most Revlons, it could flood the cuticles if you’re not careful. I used four coats to get it how I wanted it, but they dried nice and quickly. In fact, I started this manicure about half an hour before going out and it was fine by then.

Bizarrely, I’ve read other reviews of this polish that say it’s really pigmented and that they only needed one coat. They were all from the US, which leaves me wondering if the formula for the UK is different. They also all had short nails, so couldn’t obviously see the glaring visible nail line that I could after one, two and even three coats!

This is such a nice colour! I think I’ll definitely have to make a trip to the Original Factory Shop! 🙂

It’s great – lots of bargains to be had!

I need some nail polish this colour!! Really not a fan of Revlon polishes, but so tempted by this!

It took four coats, but I agree, it’s a fab colour.