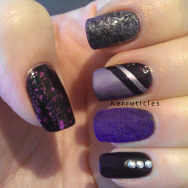 Everything But The Kitchen Sink manicure: purple

Some of my lovely Twitter friends are doing an Everything But The Kitchen Sink Manicure challenge. The challenge is fairly straightforward: on Saturdays in January you do your nails in an “everything but the kitchen sink” fashion. That basically means that you do a mismatched manicure where all (or nearly all) the nails are different.

If you want to see the manicures that everyone has done so far, then you can search on Twitter for #kitchensinksaturday.

I missed the first challenge, but am joining in as of today. I already had a velvet / flocked / fur-effect accent nail, so decided to keep that one and also my purple manicure base.

I started off with the studs and the stripes, and then I was going to add a dotted flowers nail, but didn’t think it went with the more geometric / stark nature of what I’d already done. So instead I added a Saran wrap / clingfilm nail and some glitter.

The colours don’t tie in together as well as I would have liked: Plum Night is very dark and shows up more black than  purple;  the flocking powder is a bluey-purple; and the glitter nail is more pink than I thought it would look. But it’s kind of funky, n’est-ce pas?

I enjoyed doing it and am already thinking of ideas for next Saturday! You can see which polishes and techniques I used below.

I love it & it’s a perfect Kitchen Sink mani with all the colors, patterns & textures. Spot on!