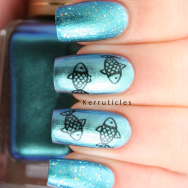 I was wearing Pacific, which is the blue-green ducochrome from the new Barry M Aquarium collection, and I was all ready to test out some nail tattoos that I had been sent by Fake Tattoos.

I received two packs of tattoos, with various designs on them, including birds, fish, anchors, ice-creams, palm trees and boats. I thought about doing a sailor-inspired manicure, with some navy stripes and using the anchors, but the blue-green colour of the polish I was already wearing, plus the name “aquarium”, led me instead to the little fish.

I guess these tattoos are like decals, but I’ve not used decals before, so I can’t say for sure. They were very simple to use. You just cut the image out, remove the plastic covering and then use some wet paper to press the tattoo onto the nail. I used some wet kitchen roll and it was only about 20-30 seconds before I could feel that I was able to slide the  paper off, leaving the tattoo on the nail.

They were really easy to use – and a lot faster and less messy than stamping!

I added a coat of Sinful Colors Nail Junkie to my other nails to complete the aquarium effect with some sparkle.

These are the packs I received, and there are other designs too on the Fake Tattoos website.

– – – – –
All manicure images are copyright to Kerruticles unless otherwise mentioned.
The nail tattoos shown in this post were sent to me for review. All views expressed in this post are my own, honest and unbiased opinions.