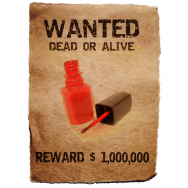 Ask a British Nail Blogger: what are your most wanted polishes?

Every fortnight, members of the British Nail Bloggers Facebook group all post about the same subject, and this week we’re discussing our most wanted nail polishes.

I’ve pretty much spent the past seven months buying all the polish I want. My obsession began back in August 2012, and since then I have amassed 258 bottles of polish.

So in talking about my most wanted polishes, I’m rather lucky in that I have mostly already bought them or had them bought for me.

I’ve stopped buying at the rate I was now though – the bank balance wasn’t coping well! So there are still a few polishes that elude me …

My most lusted-for polish isn’t even out yet in the UK. It’s Chanel Taboo, and is from Chanel’s Spring Summer 2013 collection, Révélation de Chanel, which launches in the UK on 28th June 2013. So I have a long time to wait for this one! However, knowing my (poor) luck in getting hold of previous Chanel polishes, I need to come up with a new strategy to ensure I get it.

In the meantime, I shall continue to look out for Chanel Malice. It was a limited edition polish for Christmas 2012, but I couldn’t get it anywhere! At one point, I had it in my basket in Debenhams online, and even checked out and paid for it, but surprise surprise, a few days later I got an email to say it was out of stock. I can get it on eBay, but I’m not sure I trust whether what I receive will be a genuine Chanel product.

Another polish I really wanted, and thought was finally coming my way, was KBShimmer Snow Way. I was saying on my Facbeook page how much I loved it, but that I couldn’t get it without paying a fortune in postage. A friend really kindly arranged for one of his US contacts to get it for me, but it never arrived, so I’m not sure what happened there. And it’s discontinued now 🙁

What are your most wanted polishes?

Take a moment to check out the other British Nail Bloggers and to see what their most wanted nail polishes are:

[EDIT – 16th May 2013: I got Taboo from Bond Street on 22nd April; then I got Malice from the Chanel Pop Up Store in Covent Garden today, thanks to a comment from a reader; and Snow Way is on its way to me too, from a blog sale 🙂 ]

I’d love to get my hands on the Chanel Taboo too – that just looks so quite simply decadent. Can regular polish be used with shellac mani to make them last?

Yes, you can use a regular polish *over* a Shellac manicure, just as long as you remove it with non-acetone polish.

I lust for Chanel Distraction (launched last year but permanent). What a lovely coral!!