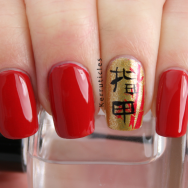 I used a base coat of Sally Hansen Rapid Red, with Ciaté Ladylike Luxe on the accent finger.

Then I stamped a bamboo design to one side of the accent nail, using a plate from the new Bundle Monster “Create Your Own” set, and added some Chinese lettering by hand, using a black striper.

I used Google translate to get the proper characters, which are: 指甲 (I hope your web browser can display that OK). And in pinyin, which is Chinese transcribed into Latin script, it’s Zhǐjiǎ. I have no way of telling if Google has done well by me or not! I did do an image search for Zhǐjiǎ and got some ancient, ceremonial-looking metal nails and one or two hands of nails, but I had expected to get loads of manicure pictures, so I’m not entirely sure I’ve got it right! Perhaps a Mandarin speaker can let me know!

After I did this, I then stamped the bamboo image in gold over the red nails, but it looked too busy, and I thought this simpler version was better.

Hello! I wanted to comment on your Chinese nails 🙂 I very much enjoy the color scheme! It’s very festive, in terms of the Chinese world.
However, I do recommend that you stamp on the Chinese characters next time. As a Chinese person, I can tell you that it is very obvious that you did not follow the correct stroke order of writing the characters, and that in itself is very rude. But don’t feel bad! Just keep in mind that stroke order is very important, which is why writing even the simplest of Chinese characters is an art.
Yep. Just wanted to let you know!

I am just getting into stamping (as in, I have some stamping plates and lots of inspiration from gorgeous manis like this one…and it IS gorgeous) but have yet to produce (re-produce?) an image that looks anything like it did on the image plate. However, having just received my purchase of BM’s latest collection, it was very fun for me to find the image you used and figure out how you selected half of it to use on the side of your golden nail behind the Chinese characters. It was a perfect choice…I hope to be able to see how portions and/or collaborations of images can be used to enhance a mani’s theme, a.k.a., message. Just beautifully done! Delphi

beautiful – nice and stripped back x