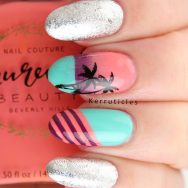 Here’s some nail art I created using the Miami Nice Meebox, for March 2017. As I’m visiting Miami a little later in the year, I thought I’d try out an outlandish 80s Miami look.

I’ve been obsessed with nail polish for coming up five years, yet there are three bottles of polish in this box from brands I haven’t heard of before. Having checked them all out, they were all founded at least three years ago … so I should have done!

The pale coral polish is lauren b Coral Canyon. It has quite an unusual brush, with a very long wand. It claims to be quick drying and to last 14 days. That’s a bold longevity claim for a normal nail polish. I didn’t test that out (yet – only two days so far) and I have to say that I disagree with the claim that it dries quickly. I found it to be particularly slow drying, in fact. It’s a very nice spring / summer colour. The lauren b polishes retail for $18 a pop. I used two coats for the base of the gradient but needed three for the plain nails to get them opaque enough.

Nailberry is a British brand. Extravagant is a mid-purple creme. It is from the Oxygéné collection, a range of “luxury, breathable” polishes. They range in price from £14.50 to £17.00. Extravagant is currently listed at £14.50. It comes in the exact same bottle as the lauren b polish, and has the same brush, but with a rounded cap.

Floss Gloss Wet is a bright mint green, and another great summer colour.  Floss Gloss says it’s turquoise, but to me turquoise is much more blue. For me, this polish sits firmly within the greens and is not far off Barry M’s Greenberry. Floss Gloss is a US brand, so that’s possibly why I’ve not heard of it before as I tend to not buy from overseas. Aesthetically, I don’t much care for the brush handle. It looks rather old-fashioned to me, as if it came from a 1970s bottle of Cutex or Avon or something. The polishes are much more affordable than the other two brands – at $8.00. But this particular polish was first launched for spring/summer 2014, so it’s a very old shade. It’s still listed on the Floss Gloss website though, but is currently sold out. I needed three coats for the base of my ring finger. Two should have been enough, but it dragged a little and there were some balder looking spots that I wanted to be sure were properly covered. The bonus with this polish is that it’s a neon and it glowed really brightly under my LED lamp.

So, the nail art is loosely based on some images I saw on Google (search for “80s Miami”). There were bright sunset images with palm trees and some diagonal stripes too.

There are four non-polish items in the box. First there are three swatch sticks (not pictured). I swatch my polishes on wheels, so they weren’t any use to me for swatching, but I did use them to try out gradient combinations.

Then there are two Charlie’s Nail Art items: some silver holographic nail foil and some multi-coloured, rhombus glitter (diamond-shaped glequins). I used the nail foil for two of my nails. I didn’t get great coverage, with some small patches missing – as the pictures show. But as my camera refuses to show up holograph (I don’t use flash), I took a pic on my camera phone to show it. And in this picture, you can see what I see in real life; you really can’t discern the tiny, missing patches of nail foil at all.

Finally, my favourite item is a mini Leighton Denny crystal nail file. My first ever crystal nail file was a Leighton Denny one. I loved it, but I haven’t seen it in some years now, so I’m very excited to have a replacement. I think I’ll put it in my work bag so I always have a decent nail file on me. It doesn’t come in a case like my larger one did, so I’ll have to treat it carefully.

Meebox is a subscription-based nails box. You can either buy one month at £20, or three months at a time for £54, which is equivalent to £18 per box. That price includes tracked Royal Mail delivery. For the items in this box, that’s good value. I totted up the retail price of the Miami Nice Meebox items and it comes to £48.87 (using current exchange rates).

I like this box. It does rather remind me of the only other subscription box I’ve ever reviewed, the June 2016 Festival Nails Nailbox. That too had a mint green and a pale coral in it. But with the nail file and the chance to try out some new brands, it’s better than that one (which has also stopped trading, it seems).


All manicure images are copyright to Kerruticles unless otherwise mentioned.
The March 2017 Miami Nice Meebox was sent to me for review. All views expressed in this post are my own, honest and unbiased opinions.
Roxanne Campbell Stormy WeatherRoxanne Campbe…Blue herringbone stamping | Bu…Blue herringbo…

Loved the beach design. Thanks for sharing.