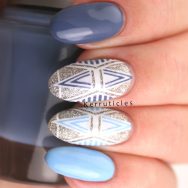 These blue geometric glitter nails were inspired by a manicure I saw by Paulina of Paulina’s Passions. I saw it and thought I’d love to create something similar but using blue – but I don’t like my manicure half as much as I like hers.

I think it’s probably because the glitter is more prominent on my manicure. And that makes it a bit distracting. I feel it needs some more solid colour.

The blue polishes I used are Morgan Taylor Flirt In A Skating Skirt (the darker blue) and OPI The I’s Have It. The very pedantic part of my nature – which represents about 99.99% of my being – is particularly annoyed that OPI has put an apostrophe in the name. It’s a plural, so doesn’t need one <stamps feet>.

The glitter is a gel polish; W7 Silver Sparks. I created the patterned nails over the top of the glitter using the reverse stamping method. I used Bundle Monster BM-XL218, from the Bundle Monster Blogger Collaboration Set 4. This particular plate is by nails.by.teens.

I stamped using Essence Stamp Me! in White, then filled in the reverse of the image using the two blue polishes.

It’s lovely to be back doing my nails so frequently again. I had about a year out, during which time I only really had plain colours on my nails. I had a busy year with some volunteering I’ve been doing, and realise it has taken me away from the hobby I love so much. So, I shall be scaling that back in favour of the nails as soon as I can 🙂


All manicure images are copyright to Kerruticles unless otherwise mentioned.
Bundle Monster plate BM-XL218 and Morgan Taylor Flirt In A Skating Skirt were sent to me for review. All views expressed in this post are my own, honest and unbiased opinions.
The Bundle Monster image is copyrighted and was provided courtesy of Bundle Monster.
This post contains affiliate links.
SensatioNail Blue Chrome PowderSensatioNail B…Purple gel nails with glitter…Purple gel nai…

The geometric design is gorgeous!