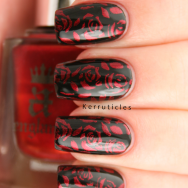 It’s Gothic today for the FingerFood’s Theme Buffet challenge and I was devoid of all inspiration. I Googled a bit and thought about doing more of an 80s Gothic look, using black and spiky studs. But it wasn’t something I fancied wearing and I wanted to keep my manicure for the whole day.

So I chose to stamp some red roses over black. It’s sort of Gothic … I think.

The base is two coats of W7 Black and I’ve stamped using A England Perceval and the MoYou London Pro 10 XL plate.

Perceval stamps beautifully, and by the final nail (the index finger), I’d worked out how to stop the annoying missing bits I get with MoYou plates due to them being etched so deeply. I discovered that a second application of polish and another scrape fills in the air bubbles and stamps beautifully. I could probably just scrape more lightly, but I had run out of nails to try it on by this point, so I’ll try that next time.


All manicure images above are copyright to Kerruticles unless otherwise mentioned.
Here are the manicures from everyone else that is participating:

Love it, red and black is always going to be a goth winner!

I didn’t know Perceval worked so well for stamping. I will definitly copy this one. Love it!

Such a gorgeous look! It works as a gothic look, but also looks for an edgier “mainstream” design <3 This is definitely one of my favorites from the Theme Buffet this week!

For some reason I was thinking Perceval was more orange, but now that I see it here, I'm in love.