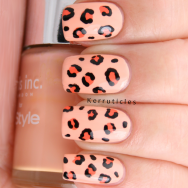 Leopard print: Y is for: You’re A Peach

I only have two polishes beginning with the letter Y: OPI Yodel Me On My Cell and Nails Inc You’re A Peach. And for the penultimate week in the A to Z series challenge I chose to use You’re A Peach and did some leopard nails.

I thought the peach base would suit leopard nicely. I painted two coats, then added the dots using just the brush of Nails Inc Porchester Place and went around them using W7 Black and a small dotting tool.

The other A to Zers have blogged about:

OPI You’re Such A Budapest (PMP)

I love the peach colors you used! Compliments your skin tone! I wish I could pull off peach colors, but it makes my skin tone look gray. Not pleasant. lol