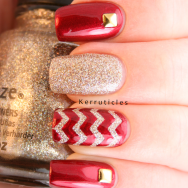 I was going out for a meal with friends and was planning on wearing a red top, so I wanted some nails to match.

I decided on a similar look to my blue and silver skittlette manicure that I did not long ago, but using red and gold instead.

The red nails are two coats of A England Perceval. With its gold shimmer, it works well with this look. I added some studs instead of stamping this time around.

The gold is China Glaze I’m Not Lion, a sparkly gold and holographic glitter. I’ve tried to capture some of the holo and the sparkle by adding in light from an LED desk lamp, but it hasn’t worked as well as I had hoped. Makes the pictures look nice and warm though!

Once again I’ve used the brilliant zig zag stickers from Nail Vinyls. These really are the best stickers for tape manicures that I’ve ever bought. I’ve just recently placed a new order, but see that they have some great new products now: hearts and stars, for instance.

This colour combination is great! I love the studs and the zig zag stickers work so well – I think I need to get some! 🙂

She seems to sell out really quickly, so be quick if you want some 🙂

Gorgeous. I love Perceval. It’s one of my favorite red polishes!! 😀

That red and gold together looks lovely! I love the whole look 🙂

Your chevron is flawless!! Everything about this is gorgeous down to Perceval. I just recently bought my first A-Englands, 9 of them to be frank and I didn’t know what I had been waiting on!!!