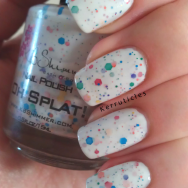 When I first started doing my nails and reading nail blogs, I came across the word “lemming”. I was perplexed at first; it seemed to be both a noun and a verb. As in: “that’s a lemming of mine” and “I have been lemming for that”. I had no idea what these people were all on about. Why would they be talking about Arctic rodents who have a (purely fictional and entirely misconceived) propensity for mass suicide?

Well, it gradually became apparent that a lemming is a polish that one very strongly desires. I still have no idea how the phrase came about – and it still seems nonsensical, so if anyone can shed any light on it, please do so – but as a polish addict, I do at least understand the sentiment behind it.

My own lemming is KBShimmer Oh Splat!, a white jelly polish base loaded with different sizes of red, orange, yellow, green, blue and purple glitters. I have wanted it since I first saw it back in September last year. But I couldn’t get it direct from KBShimmer, as the indie polish supplier doesn’t ship to the UK. A Canadian supplier however, does. But the polish proved so popular that they were permanently out of stock.

Until a week ago, that is. Last Tuesday Harlow & Co sent me an email to say it was back in stock. Yesterday, less than a week later, it popped through my letterbox. It wasn’t cheap. It cost me $21 (Canadian dollars) including shipping, which is just over £13. That’s more than I would pay for any polish except a Chanel. But boy is it worth it.

Oh Splat! is simply wonderful. I have never been so excited about receiving a polish. Nor have I ever anticipated wearing anything so much.

I wasn’t sure how sheer it might be – and I also wanted to make my new “precioussss” last as long as possible – so I used a base coat of OPI My Boyfriend Scales Walls before layering on two coats of Oh Splat!

It took a little while to get used to the application. While it doesn’t need dabbing on to ensure that the glitter goes on OK, I think I was a little heavy handed with it at first as all the larger glitters were ending up at the tips of my nails. By the second coat I got my technique right and the glitters were more evenly spread out. I’ve since read on the KBShimmer website that it’s best shaken – unusual for a polish because that can cause it to bubble on the nail – and that it’s also best with three thin coats. I do think my manicure looks less densely glitter-packed than most I’ve seen online, so next time I’ll be sure to shake it a bit before applying.

You are delightful and Oh Splat! looks wonderful on you! <3

I think the term 'lemming' in reference to wanting something you've seen others have may go back to a video game from the 90's called Lemmings where one had to build a path to get the lemmings home safely. Where the leader went, the rest would follow…to their collective doom or reward. Maybe, I'm not 100% certain on this, so don't quote me. lol

Ah, that would make sense – and I did see something about a game on Wikipedia or some such site, but still didn’t quite get it. But I now understand that “lemming” means to want something someone else has, not just what I took it to mean, i.e. to want something a lot.

Argh – you’ve passed the lemming on, I want! Gorgeous swatch:D

Isn’t it fab? Happy to pass the lemming on – it gets you back for making me want the 2True Glitterati! 🙂

I’ve had lemming be defined as the extreme wanting of a polish (or beauty product) after seeing someone else swatch it. Very pretty polish!! I’m glad you’re so happy with it. I usually get way too excited about my lems and then don’t love them as much when they finally arrive

Yes, I know what you mean – with all the expectation, I too was worried I wouldn’t love it. So glad that I do.

Aaaahhhh they are sold out again!!! Your nails look great. I will continue the search for Oh Splat!

On the Harlow & Co website, you can ask to be emailed when it comes in. That way you can then order it straight away.

I have been lemming for Oh Splat as well! I have not been successful, however in finding a supplier that ships to Canada! Can you tell me what Canadian site it was you used?!

I got it from Harlow & Co, but I think it’s now discontinued so probably your only way to get it would be blog sales or ebay or similar. Good luck in finding it – it’s worth it.

I just wanted to let you know that Oh Splat! has not been discontinued. Harlow restocks it about every three weeks or so. Like you said above, you can sign up to be notified when it is in stock. I also have many customers that buy directly off my site, and have a friend forward overseas. Just wanted to make sure you knew it was still available!

Hi Christy – thanks for that. I’m sure I read either on your site or on Harlow & Co. that it had been discontinued, but I’m so glad that it’s not.

Sorry for the confusion – I realise that I think it’s my other lemming that I’ve read is discontinued: Snow Way.

I know this is an old post but I just happened upon it, what is the polish like to remove? I’ve tried a couple of ‘effect’ polishes and they were so difficult to remove!

Hi Charlotte. It’s a lovely polish; one of my favourites (although I’m about to post about Emily de Molly Sakura, which is a similar sort of polish – coloured glitter in a milky base – and that is equal to Oh Splat! in my eyes).

To remove, it’s pretty much like any other glitter – a real pain. So instead of scrubbing at it, you either use PVA glue as a base coat, or use the foil removal method.

Hey, so happy I read this blog, I’m now FINALLY able to order the Let’s get Start-ed polish and ship to UK after quite a while of unsuccessful looking for UK sellers/shipment 🙂

I’m happy to have facilitated a new polish purchase 🙂