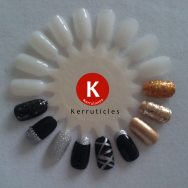 We’re going to friends tonight for drinks, then coming home for a nice meal (before probably dozing on the sofa to Hootenanny and then being woken by the fireworks at midnight!). And tomorrow we are out for a meal with some other friends.

So I want to do some New Year’s nails, but I’m not sure what to do. I’ve had a look on Pinterest and Google images, but still I’ve not been inspired enough to make a choice.

So instead, I have played about with some swatches.

Right: I’ve used a base of EHCB, added a tip using Nina Silver Slipper, and then added some rhinestones. I like how it looks, but could probably only do that on an accent nail, otherwise it would take too long I think.

Left: I’ve simply used Nina Silver Slipper on its own.

Right: this is a half moon using Silver Slipper and EHCB.

Left: I did a base of Silver Slipper, then used striping tape to add two of the lines near the tip. I then layered over EHCB and removed the tape. I smudged it a bit, so used a silver striper to go over the lines and then got a bit carried away and added some more. I think the execution is poor, so don’t really like how this came out and am not sure I have the patience today to do all my nails like that.

Right: a reverse half moon with Silver Slipper and EHCB.

My problem now is that I have too many choices and don’t know which ones to choose! What shall I do?