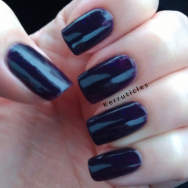 I really didn’t want to take off my lovely For Audrey manicure with accent water marble. But it had stayed on for longer than I usually leave my manicures and had finally got a few tiny chips.

So I removed it last night and set about doing a new manicure. It was quite late – about 10.30 – and I didn’t want to take an age deciding what polish to use, so I just picked my oldest non-blue/green, so that it could be a bit of a contrast to what I wore last.

It is Revlon Plum Night. I love it in the bottle, but it’s nothing special on my nails. In fact, it’s very close in colour to Barry M’s Plum (or Blackberry, according to my mislabelled bottle). And that went on beautifully, whereas I had a few problems with Plum Night. All my other Revlon polishes are great, but this one took ages to dry and I was left with a couple of bald spots too. Except when I’m wearing a very sheer colour, I rarely do more than two coats, but I think perhaps this polish needs three. Or perhaps I just need better lighting and to not do my nails so late at night!

On top of that, my bottle of my current favourite top coat, Sally Hansen Insta Dri Anti-Chip, has started to go a bit thick. I was just about to do a post praising it as being the only top coat I’ve used that stays lovely and fluid, but I obviously spoke (or thought) too soon.