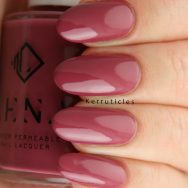 The regular readers of this blog – there are one or two … hello! – will immediately notice my new nail shape, but more of that in a bit.

Firstly, this is a swatch of a new (to me) nail brand, called LENA. This polish is a dusky pink, called (rather disappointingly) LE12. It has a name on the LENA website; it’s called Egyptian Fashionista. But the name doesn’t appear on the bottle, unfortunately; just the number.

LENA polish is breathable and water permeable nail polish. To many of us, this really doesn’t matter. Our nails don’t need to “breathe” to remain healthy and they don’t need for water to get through to them from the outside. (I should know – I’ve worn polish on my nails non-stop for the past four-and-a-half years, with no ill effects).

But to Muslims, this is very important. According to Islam, men and women should perform wudhu before praying. This is a pre-prayer ritual that is undertaken to fully cleanse parts of the body, including the hands. Many Muslims believe that wearing nail polish means that you cannot fully cleanse the hands.

Water permeable nail polish addresses this belief and allows strict Muslims to wear polish but to still adhere to their religion.

I love the colour of LENA Egyptian Fashionista. Dusky pink shades are very “me”. I love to wear them. Although, in fairness, it’s the bright shades that suit me best.

You get a generous 14ml of polish for £8.95. I wasn’t so keen on the brush though. It is wide and straight-edged and I struggled to use it as I would normally to paint my nails and still get a curve along the cuticle edge of my nails. I had to adjust my technique to get that curve and it was a little more awkward than normal.

The polish is lovely though and it dried quickly and had a lovely shiny finish. (This swatch is without top coat).

So … onto the nail shape. For four-and-a-half years, I’ve sported square nails. I loved my square nails and even though other bloggers have been gradually making their nails oval or almond-shaped or rounded over the past couple of years, I have resisted the trend in order to stick with my beloved squares.

Then, a couple of weeks ago, the corner of my index finger nail broke off. I haven’t had any breaks in a long time now, and I wasn’t happy about it. Rather than file them all down a bit, as I would normally, I just started filing the nail into an almond shape. Before I knew it, I’d done all ten of my nails.

I wasn’t sure about the shape at first. I’m not a lover of change, especially the older I’ve become. But gradually I grew to quite like them. They are easier in every day life as the corners don’t snag on things and I’m not too worried that they will break now. Before, I was so careful with my nails and I now feel less included to be so wary.

They do take a bit more maintenance though, as it’s not so simple as just filing them down a millimetre or two every week. With this shape, you have to be more careful about filing them, so that you get the shape right, and get it symmetrical. And that takes longer.

They’re also the longest they have ever been. The middle and ring finger nails are 20mm long. That’s a good couple of millimetres longer than normal. Yet, they don’t look as long as my square nails used to.

The almond shape is almost impossible to obtain on short nails, so my right hand, with its much shorter nails, is sporting various shapes of square to round, to oval. Only one is long enough to be almond. With square nails, this wouldn’t have looked so odd, but I find it a little embarrassing now that my hands don’t seem to “match”.


All manicure images are copyright to Kerruticles unless otherwise mentioned.
LENA Egyptian Fashionista (LE12) was sent to me for review. All views expressed in this post are my own, honest and unbiased opinions.
Morgan Taylor Oh, Para-chute!…Morgan Taylor…LENA Arab Girl (LE05) | My 1,0…LENA Arab Girl…

Your new nail shape is nice! 🙂

Thanks Lisa – still not sure about it in real life as my right hand doesn’t match really. I’m hoping they will now grow better if they are not square though and that they will soon catch up with my “camera” hand.

Longtime reader here! *waves hello* I was like WHOA where are the square nails. Power to you for experimenting! When I first tried almonds after years of square it was such a drastic difference. Honestly, it’s like going platinum from brunette or something.
I agree though, much easier on the nail plate. But I HATE HATE HATE filling them. I put it off so much mine get into the CLAW state, not pretty, way too long. Symmetry and similar shape in 10 nails bleh.

Hello Catherine 🙂
I think I am going to struggle with the symmetry. I’m very picky about things like that, so I expect I will be permanently filing to make sure I get it right!

Love the new shape! Like you, I adored my squares but the corners were constantly breaking off so I gave in a few months ago and went almond. My nails are in much better shape now, almost no splits or breaks so I’m happy! I hate the filing though.

Yes, I seem to be constantly filing! I look at them and see a slight asymmetry and that’s it, the file is out for the next ten minutes while I perfect it!

Mine seem to grow longer and look better as oval rather than square because I’ve got a strong C curve going on. The corners would always snap off on my squares too. Good thing about nails is if you don’t like it its easy enough to change the shape back.

Yes, it is easy enough to change, although if I were to file these down from almonds, I’d have very strange looking squares! Perhaps you can go back to square via coffin/ballerina??!