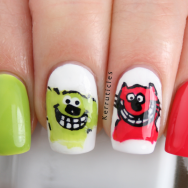 This was another prompt in the Crumpet’s Nail Tarts 33 Day Challenge that I went back and forth with ideas for.

I thought about doing penguins (might leave those until Christmas now), then an animal print like leopard or zebra. I Googled for inspiration but nothing was jumping out at me.

I was starting to get somewhere when I was looking at images of cartoon character animals. Mickey Mouse and the like are quite hard for me to replicate, but I suddenly saw an image of good old Roobarb and Custard and knew I shouldn’t have any problems reproducing them.

For those of you who aren’t British, Roobarb was a fantastic children’s cartoon, shown at tea time back when I was a child in the mid 1970s. Roobarb was a green dog and Custard, his nemesis, a pink cat. It was voiced by the wonderful Richard Briers and drawn in a very sketchy way – hence why I thought I could manage to draw it!

I hand drew the characters onto some home-made decals, rather than drawing them straight onto my nails. It was a straightforward process, and although my drawing isn’t perfect (the mouths are missing some teeth for example), it certainly represents the characters I remember so well.

I used Model’s Own Raspberry Crush for Custard. I meant to use Pink Blush, which is a brighter, more Barbie pink, but I grabbed the wrong one out of the Helmer and didn’t realise until it was too late.

For those of you who have never seen it, here’s an episode of Roobarb, called When The Day Wouldn’t Keep Still:

It’s “South America” next – I have no ideas yet!

This is adorable! I wasn’t familiar with the cartoon so I thought Roobarb was a green koala : /. After my confusion cleared up this looks like an awesome job!

aww these are cute!