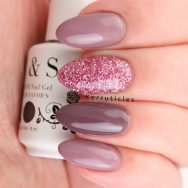 These purple gel nails with glitter are a slight variation on my recent dusky pink gel with glitter nails. They use the same glitter as I used before, but here I paired it with some purple-toned gel polishes instead.

I used the purple gel polish by Y&S that I bought recently and which came in a set of four Y&S polishes. It went so well with a dusky lavender colour, Bluesky 63921 (sometimes known as Thistle Violet), so I used that with it, and added glitter on my middle fingernails.

The four gel polishes in this set only cost £8.99 from Amazon – such a bargain. I had half expected them to be poor quality and perhaps even experience some issues with them, but they’ve been brilliant.

The glitter is once again from an NYK1 set. I applied it this time over an un-cured layer of Gelish Structure gel polish, which I then cured, and finally used two coats of gel top coat to seal it in smoothly.

I have tried – in vain – to get my camera and lighting set-up to accurately show glitters and holographic effects. I usually take my photos in a light box, using manual settings, and this just doesn’t show any sparkle at all. So I’ve tried using a flash in addition to my lights, but I still can’t show the sparkly goodness of these. I think I’m going to have to start adding fake sparkles!

Beautiful as always! I just got a lamp so I’m both excited and nervous to try gel polish! D:

Oh good luck! I look forward to seeing the results.