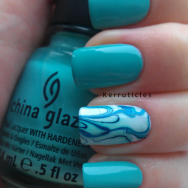 China Glaze For Audrey with a water marble accent nail

I’ve tried water marbling once before. Just once. About four months ago, when my nail polish obsession was just in its infancy. It was abysmal. The technique seemed to work well but the polishes I used just didn’t and so I parked the idea of water marbling altogether, thinking I’d perhaps revisit it if I ever got any more suitable polishes.

I had read that China Glaze polishes are good for water marbling, so today I checked through my now much larger stash and pulled out three blues: For Audrey, Up All Night and Sexy in The City.

I wasn’t sure I was going to get it right this time either, so I chose to do water marbling on just an accent nail. I painted my ring fingers in Barry M Matt White, ready for water marbling, and the others in China Glaze For Audrey.

I’ve not used For Audrey before. It was one of my earlier purchases, and one that I desperately wanted. I didn’t know where I could buy China Glaze in the UK back then (Sally is my go-to now), so I had to buy it on eBay. I bought it but didn’t get around to using it until now. It’s even more beautiful on the nail than it is in the bottle. Such a perfect Tiffany blue.

The water marble for my right hand did look more like I wanted, with stripes across the nail:

And with this manicure, my untrieds now number (only!) 99. (Oh no, I forgot that I ordered five polishes yesterday … so maybe not!)

that water marbled nail is amazing !

Thank you. I’ve entered it in your competition 🙂

love, love the teal!! your water marbelling looks awesome, I suck at it 😛 gorgeous mani

Thank you. I usually do my nails every other day, but this manicure is staying on as long as I can make it last!

Great water marble. I see a lot but yours has a very unique look that’s appealing.