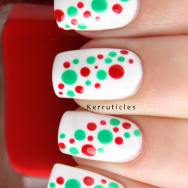 Oh there really are some prompts in this challenge that I loathe. So far, Mexican nails is the worst and has caused me no end of problems.

I started off by trying sugar skulls. I have usually only seen these done on a white or black base, but I had the great idea – or so I thought – of painting them over a coloured base. I chose four complementary brights and added in the skulls in white and then adornments in various combinations of the same colours. But it looked hideously childish and I hated it straight away. I took a few quick photos, but took the manicure off almost as soon as it was finished.

I really didn’t know what I was going to do then, until I found some sugar skull decals on eBay. The seller said they posted out within 24 hours, so I painted my nails white in preparation. But my decals hadn’t arrived by yesterday, and so I had to think again.

In desperation, I decided on a recreation of the Mexican flag, using a home-made laser printed transfer (and the vodka method). I repainted my nails, replacing some of the white ones with green and red and let them dry. I copied, resized and reversed an image of the eagle that goes in the middle of the flag, intending to use it as a transfer. Then, when my nails were dry, I sat down yesterday evening to finish them off. All I needed to do was add the home-made transfer. But my laser printer is running out of two colours of ink and when they were printed, they looked the wrong colour. Undeterred, I decided to use them anyway. But the things just wouldn’t transfer. I think it must have something to do with the low ink levels.

Next, I repainted all my nails in white, then sponged on green at the tips and was going to sponge red on at the top. But as soon as I’d done the green, I immediately knew that was also wrong, so took it all off again.

For my fifth attempt, I just decided to go simple, and did a dotticure of red and green over white. It’s nothing special in terms of the Mexican prompt, but after five attempts, it has to be, as it’s all I’ve got!

Love this, great colour combo without being too Xmassy. Great job, I might try this with some other colour combos

I did it with orange and red and loved it: http://www.kerruticles.com/2013/08/holiday-nails/

Oh! finally someone who didn’t do the skulls! Do people only think of sugar these days, LOL !