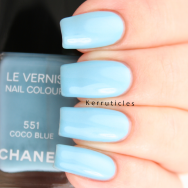 Chanel Coco Blue had been on my wishlist for ages. It was one of a collection of three blue polishes, the Les Jeans collection, which was released in September 2011 for Fashion’s Night Out.

I bought Blue Boy from the collection about a year later. I’m not sure if the other two were still available then or not, but I only got the one. Then later on, I realised I wanted Coco Blue too. But it was too late. While Blue Boy had joined the main collection, Coco Blue was gone. The only place it seemed to be for sale was on eBay, for ridiculous sums.

That didn’t deter my husband though, who paid a ridiculous sum (over £40) and surprised me with it for Christmas. I wouldn’t have paid that for it – despite how much I wanted it – but I’m glad he did!

It’s a pale blue with a hint of shimmer. It’s quite sheer for a Chanel polish, and so this is 3 coats. The shimmer isn’t very shimmery on the nail, but it does give the polish a high shine look.

Now that I have Chanel Coco Blue, I of course want Blue Rebel to complete the collection!

I just looked up Blue Boy to see the one of the trio you already had. Coco Blue on this post is so feminine and very pretty. Then I looked up Blue Rebel and went, “Wowza!” That’s a gotta get, for sure! What a keeper of a husband!

I want ALL the Chanel polishes really. But they would take up my whole wishlist page!